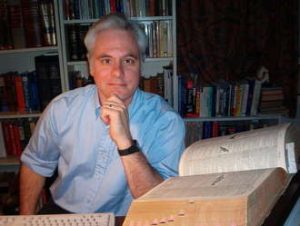 Charlie has never met anyone who had a graduating class smaller than his. The school may be small but the experience of going to Buxton is gigantic. It was because of Buxton that Charlie got to build a house in Granville, VT, with fellow ’76 graduates Chris Pratt and Bayard “Wink” Cutting. In his senior year Charlie created and tended a 50 x 75 ft. vegetable garden in the upper field and was co-captain of an undefeated soccer team coached by the late Kieron Kramer. During his years at Buxton he was also lucky to have had the extraordinary experience of having several iconic teachers, including Virginia Hall Smith, Brad Davis, Peter Tacy, and Ben Fincke, to whom he dedicated one of his books, Test of Time, a vocabulary-building novel for high school students.

After graduation Charlie went to Brandeis for a year and then to Yale, where he got his B.A. After moving to San Diego, CA, in 1981, he became a writer, a broadcaster, and a logophile (a lover of words) who specializes in writing about the English language for a general audience. He is the author of numerous articles and twelve books, including Verbal Advantage, The Big Book of Beastly Mispronunciations, and How to Tell Fate from Destiny and Other Skillful Word Distinctions, which will be published in October 2018. Charlie has also been in radio and done voiceovers since the mid-eighties. He was a founding co-host of the public radio show A Way with Words, and he appears monthly on the Mandy Connell show on KOA News Radio in Denver.

As is often the case, when alums talk about their time at Buxton they are transported back in an instant and a vivid narrative of memories and feelings flow. Charlie’s love for Buxton is palpable when he talks about being a student here. You are welcome to contact him through his website at http://www.charlesharringtonelster.com/.